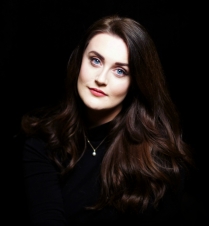 Soprano Sarah Brady was a scholarship student of the Schola Cantorum St. Finian’s College before she further pursued her studies at the Royal Irish Academy of Music, where she recently graduated with first-class honours. This year, she will move to Switzerland, where she has been offered a place in the opera studio at Theater Basel.

Notable engagments include a live radio broadcast on RTÉ Lyric FM with the RTÉ National Symphony Orchestra, several performances and masterclasses at the Wigmore Hall, and a song-project collaboration with The Juilliard School and Guildhall, which saw her perform in both London and New York. As well as this, she also sang for The Ireland US Council in New York, and she performed in Estonia as part of a cultural exchange. Operatic roles include Pamina in Die Zauberflöte, Sicle in L’Ormindo, and Novice in Suor Angelica.

An experienced oratorio singer, Sarah has performed many works by Bach, Handel, Mozart and Britten, mostly recently including Bach’s John Passion, Haydn’s Creation, and Handel’s Solomon. She is a multiple competition prize winner, having won the Trench Bursary, the Navan Young Opera Voice Competition, The Gaiety Bursary, and the Irené Sandford Bursary. In June 2016, she was awarded the Briscoe Cup for Student of the Year at the RIAM.

Upcoming engagements for Sarah include the title role in the world premiere of Siobhan Cleary’s new opera Vampirella, which will be directed by Conor Hanratty and conducted by Andrew Synnott.